’Twas the week before Christmas, and in through the door,

I set down my bags, and heard paws scratch the floor.

My partner had planned his surprise with much care,

So I’d arrive smelling pet dander and barks in the air.

Five days before Christmas and I arrived home to my first holiday present from my fiancé: a three-month old puppy.  We had talked about a puppy for several weeks leading up to this date.  But ’til that point he had been adamant that we should wait until spring and the conclusion of the harsh Chicago snow and ice festivities.

So, I was shocked.  And it’s taken the past few weeks for my dog parenting self to catch up with the requirements of this fluffy and lovely new addition to our household.

I had a dog growing up, so the responsibilities of pet ownership weren’t entirely new to me.  And I had done some refresher work, reading some acclaimed dog-rearing books to prepare.  The thing that has caught me most off guard has been this:  the intelligence and insight of my three and a half month old pup.

I’m amazed at his keenness.  I’m surprised by his adaptability and eagerness to learn.  I’m shocked by his ability to clearly demand what he wants – and his willingness to retaliate if he doesn’t receive it (“Oh, really?  You won’t give me that food? …how do you like it if I just pee over here?”).

There have been a few takeaway points that he has taught me about my own behavior, even as I try to school his.

My puppy, Galileo, is a rescue.  His mother, who was about to give birth to her litter, was in a high-kill shelter in Kentucky.  A rescue group in Illinois got her out on the final possible shuttle before she was scheduled to be euthanatized.  So, Galileo and his sisters were born and raised in foster-care in Des Planes.  I am so glad he had a happy home to live in for his first few months of life – but Des Planes is a very different sort of place from downtown Chicago.

The first several days we took him outside to the busy, city streets, Galileo would shake heartily.  He was scared by all the people, cars, and buses.  Since then, he’s gotten much better; but the city sights are sometimes still a bit overwhelming for him.

In those instances when things are a little much, he always does the same thing.  He sits down wherever he is, gets very quiet, and looks around steadily.  He takes in his surroundings.  Once he’s evaluated the scenario, he will get up and start walking again, regardless of how long it takes him to comprehend and feel safe.

I love this response.  Taking a moment, getting very still, and simply observing.

How often, when things get scary and chaotic do we rush to react?  I know for myself that I tend to immediately dive into “problem solving mode.”  And time and again, I observe that I would have served the situation better by taking some time before responding.

My furry son naturally does this.  He’s wary and patient.  And this ability to stop, watch, and then decide is a skill I myself would like to acquire.

Our first two days of puppy ownership were marked by a constantly awake critter.  He never slept at all.  I looked up online that puppies are supposed to sleep fifteen to twenty hours a day, and our little guy was only getting seven.  This wasn’t nearly enough.

We started to find ways to get out little guy to relax and snooze.  Super long walks and play times with other puppies became a must.  We had to tire him out so he could reset in sleep.

Without sufficient rest, he becomes a holy terror.  With regular naps, he’s a loving little guy.

And I’m the same way.  It’s reminding me how much rest and down time I personally need – especially during this time of year where the season is naturally encouraging time for reflection and hibernation.

Similarly, the food our foster mom had been feeding him was dry and he was really disinterested in eating.  When we brought him to the pet store, they noticed his skin was dried out and he already had dandruff.  They recommended a new pet food with fish oil – and Galileo just devours it.  He is eating so well, the dandruff is mostly gone, and his behavior is more stable.

I know for myself that I feel more balanced and at ease when I’m eating nourishing food.  Today, for example, I ate four-day old leftovers for breakfast; and I don’t feel as exuberant as I normally would.  I need to pay clear attention to what I’m putting into my body and how that affects my mood.

3.  We All Go Through Rough Stages

My dog is teething.  A lot.  When I peek into his mouth, I see these tiny teeth erupting from his gums.  I’m sure it must hurt him quite a bit.  And to assuage that pain, he wants to chew on everything.  Hands, couches, ribbons, toys.  You name it.  We try our best with chew toys and frozen carrots to numb the pain – but it just sucks right now.  It’ll suck for another two months, and we just need to put up with his incessant need to chew until then.

How hard is it to have that same compassion for one’s self?  When I’m having a rough or painful time, how often do I say, “Kaelan, get over it!  Move on!” instead of giving myself the time or grace that I need.  I feel like I constantly expect resilience and health and grace from myself, and have little enough compassion when I falter.  Can I learn to say to myself, as I say to my dog, “things suck a little right now – and I’m sorry – so do what you need to do and I know it’ll get better in a little while.”  Cultivating compassion for the here and now – and allowing myself to do what I need until things get better.

4.  When Things Don’t Go Your Way, It’s Natural to Retaliate

Our new son is a foodie, like his dads.  He LOVES food of all kinds.  And he gets super pissed if we don’t share what we are eating with him.

Separately, he’s doing really well with potty training: he’s learned to go to the door or scratch on the window when he needs to be walked outside.  But often, after a petulant thirty minutes of begging for our food, he’ll walk over to one of those spots and relieve himself without asking to be let out.  It’s almost as if he’s saying, “I know you can’t be mad because I’m in the area I’m supposed to be at to be let out – but I’m not giving you any warning.”  He plays us – and gets “some of his own back,” as they say.

It’s a normal reaction.  But how willing am I to accept that reaction in myself?  When I feel betrayed or disappointed, I often get upset at myself for getting upset or pissed.  I expect myself to take it in stride and not react.  But I do.

I need to have more compassion for myself for the normal, animalistic responses that happen when things don’t work out.  I don’t need to scold myself for not being perfect – just as I wouldn’t scold the little guy.  I need to let myself feel whatever I am feeling without judgement.

5. Intelligence Can Come in Any Age or Form

My little guy has been in the world for merely a couple of weeks.  Yet, already, he is so intelligent.  He learned his name in a day, to sit in a day, and to lie down in two days.  He figures out patterns and ways of commuting through the world at a lightening pace.  He already understands numerous commands and has developed a non-verbal language all his own.  And all within a hair’s breadth of time!

I am a huge believer in learning taking a tremendous amount of time.  Want to learn something well?  Study it for a decade and then get back to me.  I tend to assume that if someone hasn’t taken many eons to explore something in depth, they are a poor steward of that knowledge.  But here I am, babysitting this little, smart dog, who truly understands and can manipulate events within a brief span.  How can I reconcile these beliefs?

I have to start accepting that people may have tremendous insights and knowledge into subjects, even if they’ve only had brief opportunities to interact with them.  Sometimes profound learning happens all at once.  Sometimes learning takes a lifetime.  I need to accept the possibility that I can learn a great deal from those for whom a topic may be quite new.  I need to allow myself to learn from the proverbial children. 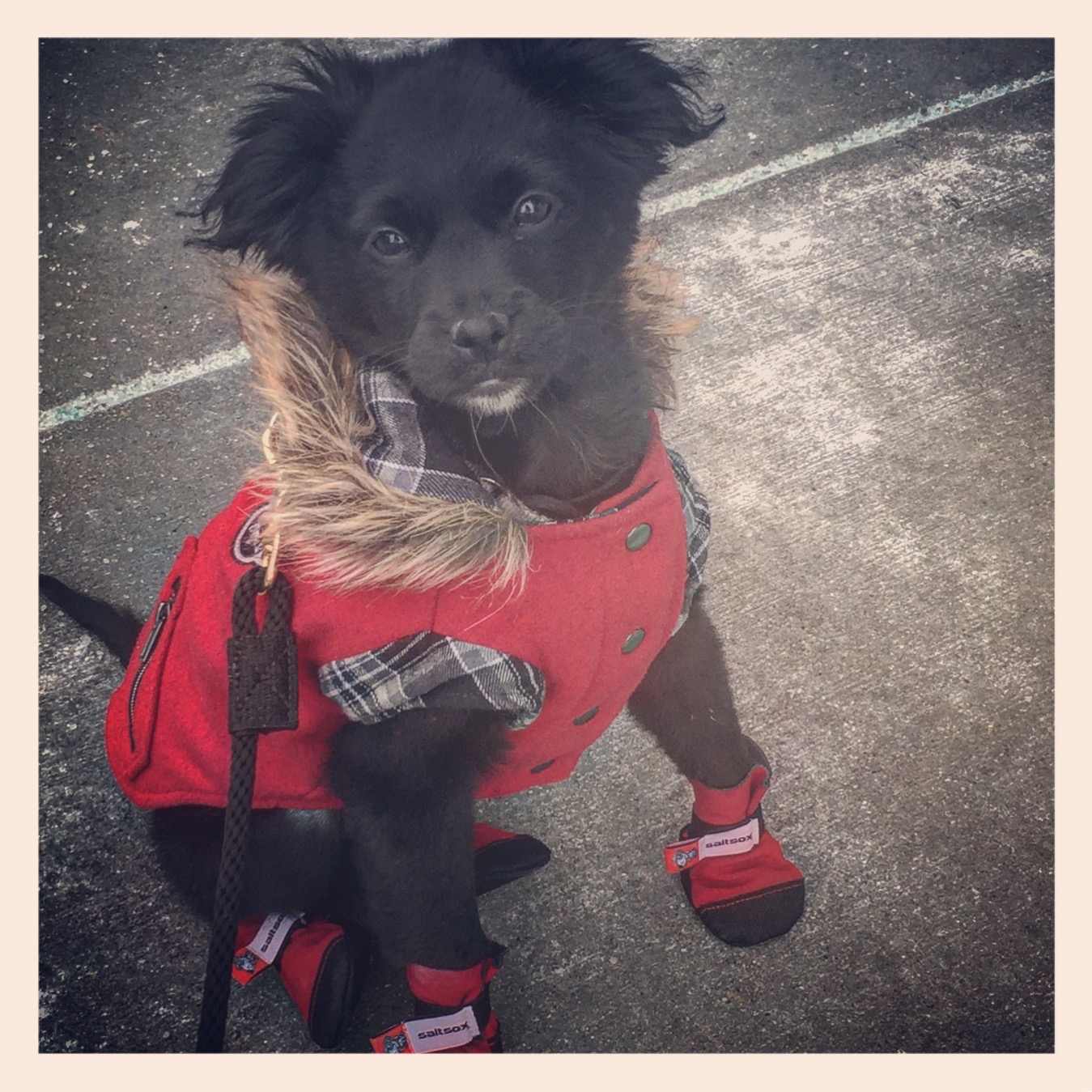 I’m sure that there’ll be numerous other lessons that start piling up over the next several months of dog-parenting.  I’m grateful for what I’m already beginning to learn, and for the lessons yet to come.  Here’s to many more happy and fur-filled months in the home!

4 thoughts on “5 Lessons My Puppy Is Teaching Me”